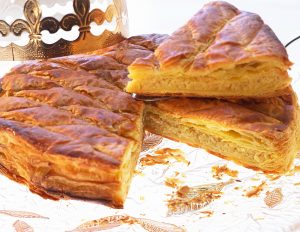 Who will become king or queen for the day at your house? Bake This yummy french king cake and have fun with the family & friends!

Traditionally, the galette des rois is made to celebrate Epiphany, which falls on the 6th of January, twelve days after Christmas. The cake is eaten in celebration of the arrival of the three kings who have traveled from afar with gifts for the newborn baby. But I won’t tell if you make the cake another time of the year!

The traditional galette is cut in a very specific number of slices: one slice for each person sitting at the table plus one. The extra slice is symbolic for the first poor person passing by.

The youngest person in the room (the most innocent one and therefore fair in the distribution of the slices) goes under the table, and announces who gets each slice.

The person with the fève in the slice is crowned king or queen for the day, names their king or queen and gets the figurine as a keepsake. If a grownup wins the prize, it’s down to them to buy the next galette, like a game of tag with cakes.

Fève” (pronounced “fev”) literally means a dried bean which was historically baked into the cake.
But by the late 19th-century the beans were replaced by porcelain figurines, some of which have become highly collectable.

If you decide to hide a fève in your king cake, don’t forget to let your guests know before they begin to eat.

The French president is not allowed to “draw the kings” on Epiphany because of the etiquette rules. Therefore, a traditional galette without figurine or crown is served at Elysée Palace.

Eat this deliciously cake with cider while still warm to enjoy the filling and the aromas at their best. La galette des rois, the only sociable cake that can make you feel like a king.

Hi! I am a Paris blogger writing about food, beauty and fashion. Welcome to my lifestyle blog!